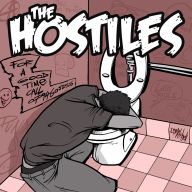 I promised this bunch that I would make it up to them for missing their support slot at the Suburban Legends gig earlier this week. What better way than a Band of the Day post here to (hopefully!) drum up some more interest in what is a damn fine ska punk band.

The Hostiles are based in Ayr and was formed by two American brothers who moved there some years ago. By 2009 they’d formed the core of a band with the addition of a handful of locals and released Always Looking Forward, their début full-length album.

No afraid of hard work, they toured the UK on the album and got signed to Go Steady Records as a result.

Since then, they’ve continued to hold typically loud, sweaty and energetic gigs both up and down the British Isles and abroad, taking their brash tones over to Europe for numerous dates in late 2012. An EP, Late Nights…and Early Hours, followed and then work began on a second album which – came out recently. Called For A Good Time Call 07946058526, you can pick it up from their bandcamp page.

Their sound is typical of the genre and their attitude is one to match – outgoing, bouncy, funky, brash… pick your superlatives. They’ve got plenty of stuff to listen to online (usual links below) and their merch is very reasonably priced should it happen to appeal.

Having had a chance to listen to a few songs, I’m slapping myself for missing them the other night. Next time, guys. Next time…