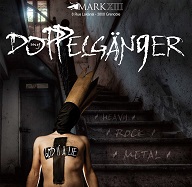 When the guitarist of an outfit as good as Lonewolf emails you to tell you about his new side project, you tend to listen. Especially when that project is being done pretty much for the love of it and without a label funding everything.

Joining Alex in My Doppelgänger are Tonio (Lonewolf’s drummer), Will on vocals, V on guitar and “Rgeneral” on bass. The sound that Alex describes is “like Guns N’ Roses meeting Metallica with a touch of Lynyrd Skynyrd and with a kind of Hellhamer on the drums! No musical boundaries , but still very metal…”

I’d say it’s a little heavier than the bands mentioned above and certainly different from his main band. But, hey, why do a side project that’s just the same as what you do most of the time?

Their album, God is a Lie, is available now and is a concept piece. The story behind it is thus:

In the supernatural world, each individual has a ghost-like double, a malevolent twin: the Doppelgänger.

Cross through the mirror of personality and imagine the dark side of a Hetfieldian evil twin screaming his hate and madness. Face Slash’s Mister Hyde, decadent and gnarly…

Shake all of them, mix with 70’s keyboards and a furious drum : you’ll get a musical Doppelgänger.

The album is meant to describe the degeneracy of a being, lost in a world he can only feel through its violence and its perversion. The unequal fight between the conscious man and his baleful double will bring him to the end of a life that was eventually sauntering on the sinuous road of insanity.

As well as a digital download, you can pick up a CD copy with a carefully imagined and produced 16-page booklet. Both can be ordered via their bandcamp page.