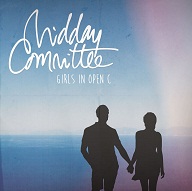 I love the variety in this job. From a couple of heavy bands we’ve had recently to a British pop/punk act who have quite a bit of variety in their repertoire.

On the cusp of releasing their third album (Girls in Open C comes out on April 7th), Midday Committee have been around since May 2011. Their sound, to my ears, is more pop than punk but that doesn’t (or shouldn’t) put you off listening if you like the bouncier, light stuff once in a while.

They come from Portsmouth, but let’s not hold that against them. Hey, the one time I went all the way down there, they beat us 1-0 with a goal from the guy we’d just sold them because we forgot to put in the “you can’t field him against us” clause. Not that I hold a grudge or anything.

Girls in Open C has all the things you need to inflict a bunch of earworms on an unsuspecting audience. Choruses which are actually choral; bouncy tunes; simple rhythms that make your foot tap and head nod. As a bonus there’s what pretty much classes as a power ballad featuring guest vocals from Christina Rotondo. It adds a little twist of originality to the album.

I gather the band have escaped near-death at the hands of a jet-ski (I need to remember that in case I interview them), as well as the usual tumultuous changing of members. However, they seem to be both stable and alive at present which is a good thing.

Sample track below and a gajillion others via the links. Enjoy.