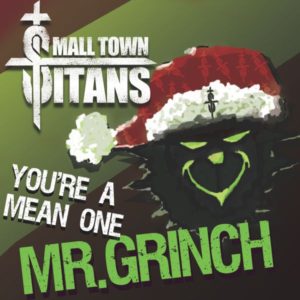 York, PA heavy rock band Small Town Titans has released their cover of the classic Christmas song “You’re a Mean One Mr. Grinch,” giving the already darkly playful track an even more sinister edge. “You’re a Mean One Mr. Grinch” was filmed live in the studio by Springwood Productions. The band has also released the song on Patreon, a direct to fan social media platform, for their biggest supporters. Subscribing to the group for just a dollar a song on Patreon grants fans new songs first and puts their names in the credits of future YouTube videos.

We wanted to do something different for the holiday season this year, so we decided to revisit ‘You’re a Mean One, Mr. Grinch,’ a tune we had covered for holiday shows in the past. Other than the Misfits, we really haven’t heard a rock band of any kind cover this song. We rearranged our take on it together and created a dark, bluesy, sinister version, and we are very proud of the result, captured live in the studio.