It’s that time of year again. As 2017 draws to a close, rock and metal media folk everywhere are reflecting on everything hard and heavy from the past year and sharing their thoughts with their respective readership. Now it’s my turn! 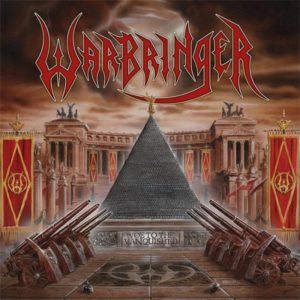 Choices, choices! As with every year there’s been a multitude of high-quality headbanging records released in 2017. A few highlights for me include awesome albums like Overkill‘s The Grinding Wheel, and Immolation‘s Atonement.

However I think my favourite release from this year has to be Warbringer‘s Woe to the Vanquished. The album shows the band at the top of their game with their signature high-aggression modern thrash with other extreme flavours mixed in. It’s simply a great album and proves that Warbringer are destined to rise to the top of the thrash metal echelons and carry the torch of the genre when the legends are gone.


I don’t often come by many new bands I like (mostly because I keep listening to my favourite older bands and their new albums), but this year I discovered two – namely Wretched Soul and Damnations Hammer.

I came across the former at Bloodstock this year and their raging thrash mixed with NWOBHM-esque melodic moments and black metal outbursts really caught my attention. Wretched Soul’s latest release The Ghost Road is a storming album and their live performance was awesome – definitely a band to look out for.

I discovered the latter while they were supporting Sacred Reich in Glasgow and I was mesmerized by their live performance. Damnation’s Hammer’s latest album Unseen Planets, Deadly Spheres is also a great album with its chugging riffs and eerie atmospherics. Another upcoming band I’d recommend to keep an eye and ear on.


There were a lot of great gigs this year for me and it’s hard to choose the best. Looking back over the year there are four that instantly come to mind. Sodom in Glasgow is of course one for me. It was awesome to see my favourite band thrash my stomping ground. Another is Autopsy‘s headlining performance at Glasgow’s Lords of the Land festival. I’ve been dying to see Autopsy for years and when they laid waste to my doorstep, they didn’t disappoint. Both gigs were beyond awesome and I hope Sodom and Autopsy return soon.

The other two shows were both at this year’s Bloodstock festival – Possessed and Municipal Waste. Possessed were a must-see for me since I missed their gig in Glasgow the previous year and it was a joy to see them perform. The band were having a great time and their fun vibes were infectious as the crowd moshed along to the forefathers of death metal’s classic tunes. As for Municipal Waste, I had been dying to see them again since I’d last seen them when I was about 15. Their show was some of the most fun I’ve had and it was amazing to be part of the 711 crowd surfers that helped the band break a world record.

This year I got to see a lot of bands I had been desperate to see and I got to meet so many amazing musicians and some of my heroes. A real standout moment for me was when my friends Kenny (frontman of my local thrash merchants Circle of Tyrants) and Andy got to have an extensive chat with Possessed frontman Jeff Becerra at Bloodstock this year. He was really friendly and humble and by talking to him, it’s clear the man lives for metal and loves what he does. It was a pleasure to speak to him and reinforced my love of Possessed and their raging death/thrash. It reminded me of the joy of being a metalhead and immersing yourself in the vast world of intense heavy music, and sharing it with the world. That to me is an awesome thing.


Everyone will say it, but the amount of amazing musicians in our world that we have lost each year is always one of the saddest things. In addition to that, there’s been lots of sad and scary things that have been happening in the world and it’s frightening to see what the future might hold. However there’s always metal that’s there for support where you can use it for escape, vent your frustrations and speak up for injustices in the world.


Overall, 2017 has been another awesome year for metal. With loads of amazing records coming out, bands touring worldwide and increasingly successful festivals, it’s clear that heavy metal is thriving. Our music continues to grow and get better every year and 2017 is testament to that. I’m certain I’ll be saying the same thing this time next year when reflecting on 2018.

Most Looking Forward to in 2018

I’ve already set my sights on the upcoming Glasgow gigs from Pestilence and Anvil. Bloodstock is always on my gig wishlist and this year’s festival is looking strong so far with the currently announced lineup. Then there’s what’s looking like my best show of 2018 – Lords of the Land festival. The lineup features three bands I am dying to see, namely Dark Angel (though I’ve seen before at Bloodstock 2015, I still have withdrawal symptoms from that show), Demolition Hammer (who I never thought I’d get the chance to see) and Unleashed. The rest of the lineup is also killer and it’s certain to be an amazing festival.

Now that 2017 is over, there’s not much else to say. 2018 is certain to be another intensely headbanging year for heavy metal and there’s lots to look forward to. For all the rock and metal that’s fit to print in 2018, you can expect to find it all here at Moshville Times.