In case you didn’t know (get out from under that rock!) we’re hosting a third stage at Wildfire this year on the Saturday and Sunday. Just to make sure you know what mouthwatering musical delights are heading your way, we’ll be featuring a profile of each of “our” bands in the runup!

Wildfire is held at Wiston Lodge, about 30 mins south of Glasgow, from June 23rd to 25th and tickets can be purchased from the official website. 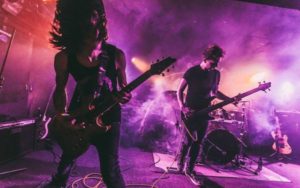 Rare Breed are a five-piece metal band from Glasgow who have built up a steady following within the Scottish metal scene since their formation in 2010. Their sound features thundering drums, a mixture of growl and clean vocals, and some damn groovy riffs.

To get an idea of what to expect from their set at Wildfire Festival, head over to Soundcloud and give their debut four-track EP D.N.B a listen. My personal favorite track is “Through The Eyes Of Another”. Check out their video for “This Is The Sickness” below.